After 12 days home in La Quinta, we were ready to resume our motor home adventure. We took an early flight out of Palms Springs to Atlanta (with a brief stop in Phoenix). Then it was a 3.5 hour drive back to our motor home, quietly waiting for us in Savannah.

RV Parks:
Myrtle Beach KOA: Seemed OK when we pulled in, but no power so had to run our generator — and it was 94 degrees!
Greenville, NC: Whispering Oaks RV. Wide open, level sites. We had a great spot with a view of the pond (and it’s resident turtle). No facilities at all, but we don’t need any.
Kill Devil Hills: OBX Campground. Also a nice open site, but as with many parks, it was a back-in site with our back to the view of the water. Oh well, nice nonetheless.
Virginia Beach: Virginia Beach KOA. Huge, people everywhere, but nice location near the beach. 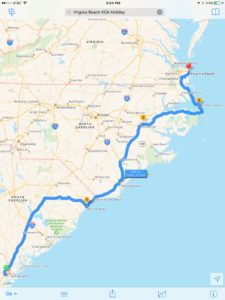 Myrtle Beach, SC — Up early and off on our journey north. The KOA in Myrtle Beach seemed nice enough, and, as always, they had someone escort us to our site. First problem — plugged in and immediately blew the breaker on the pedestal. OK, off to site #2 — uh, oh, blew another breaker. Moved to a 3rd site, hopefully on another power grid — no luck. We couldn’t believe it was our problem, as we haven’t had any problems in all our travels. Must be a campground issue! It was 94 degrees and very humid. Had to run our generator for air conditioning until about 8pm. Our three solar panels kept us going throughout the night, with TV, lights when we needed them and power to the frig. Our camping neighbors were very understanding. Fortunately it cooled down enough to be able to turn it off and sleep with the windows open.
We have always heard of Myrtle Beach and were anticipating a nice intro to east coast beaches. We were very disappointed to say the least. The boardwalk/beach area was one tacky tourist store after another, with cheap restaurants in between, and gaudy amusement activities for kids everywhere. At least we were there mid-week and schools are not out for summer, or we would really have been in for a treat. [Editor’s note: this is our personal viewpoint only and does represent views of “the management.”]
Due to electrical problems, and the cheap carni atmosphere, we left in the morning. (By the way, FYI, from Georgia through South and North Carolina is Dollar Store/Family Dollar territory . . . they’re everywhere! Just thought you’d like to know.) 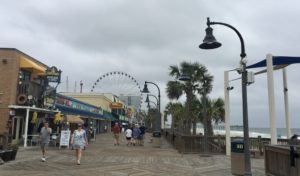 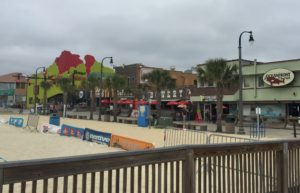 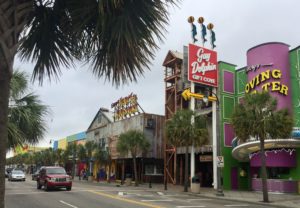 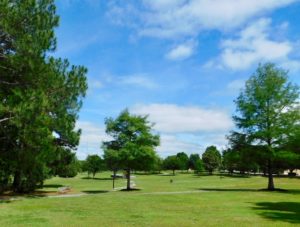 The Tar River Greenway bike paths were a great way to get our exercise. 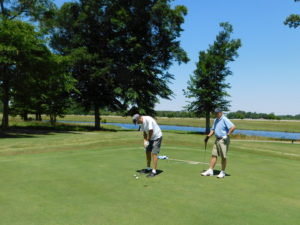 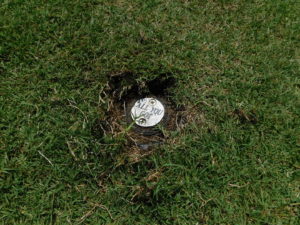 John checked this sprinkler to find the distance to the green — pretty funny!

Greenville, NC — Spent another night without air conditioning. Did have to run the generator in the morning for coffee and to cook breakfast. John was on the phone with son, Dan, and our repairman, Moses, to diagnose the problem (he’s great — Tami has his number). John felt strongly it was the electrical cord reel and proceeded to dismantle it totally and throw it out. Wa la, problem solved!! Not only solved, electrical now seems stronger than ever . . . quicker coffee brewing, hotter water faster, and stronger air conditioning. OK, let’s explore Greenville. Off to the downtown area, an East Carolina University town. Pretty quiet place, but a nice lunch.
The next day was golf just 2 miles from our campground — Bradford Creek Public Golf Course. For $31 each, we had a nice round on a well groomed course. No one was in front of us, and no one behind us . . . except one golfer who joined us. Turns out we had a great time playing with Fred, and exchanged numbers. He called later and invited us to his house for dinner the next night — invite accepted and stay extended by one night. That meant we were in the same campground for 4 nights — something of a record for us!!
Next day we got our exercise by biking the Tar River Greenway in town. That night we had a great time visiting with Fred and Cathy at their home in “Little” Washington, NC. They had a lovely home on a cove of the Tar River. We got to meet their 3 well-behaved rescue dogs (John was ready to take one home), as well as Cathy’s 19-hand Holstiener warmblood dressage horse — he had a very friendly personality. Nice people, nice dinner, love the southern hospitality. 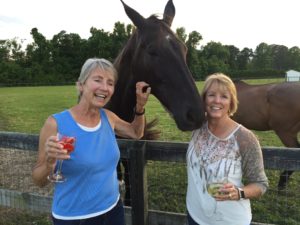 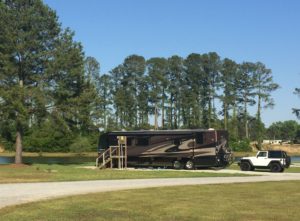 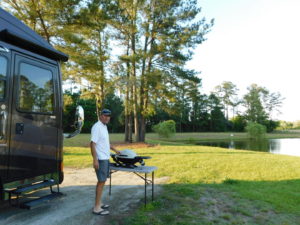 Our site at Whispering Oaks, Greenville — one of our favorite spots. 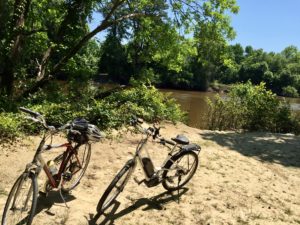 Kill Devil Hills, NC — OBX stands for Outer Banks. There are hundreds of nice looking condos everywhere that are mostly rentals. It wasn’t quite the season yet, so traffic wasn’t too bad . We had flown into Kill Devil Hills probably 20 years ago with John’s mom, Nancy and her beau, Richard. It is where Wilbur and Orville Wright took the “first manned, heavier-than-air flight that left the ground by its own power, moved forward under control without losing speed, and landed on a point as high as that from which it started,” in 1903. The visitor’s center is under construction, but we drove through the park and saw the hill they launched from and the distances they flew that first monumental day. It is definitely an event that changed history, and changed it quickly.
The beach is wide and miles long. If it weren’t so darn hot, we would have enjoyed a long walk. But, a short one sufficed before we retreated to the air-conditioned motorhome.
Played golf again, this time at Nags Head Golf Links. Nice course, but it got to 94 degrees and humid before we finished, whew. Crazy to be having these hot days this early in the year! 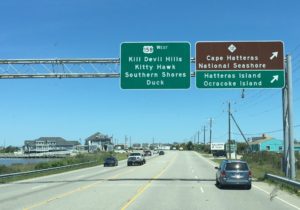 The Outer Banks of NC. 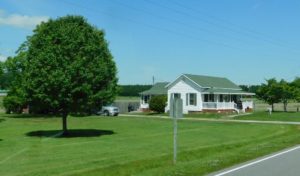 Loved the neat white houses along our route throughout South and North Carolina. 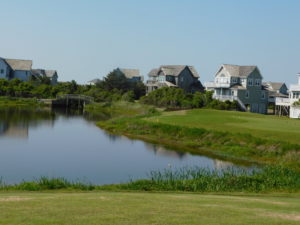 Some of the vacation rentals in the Outer Banks. 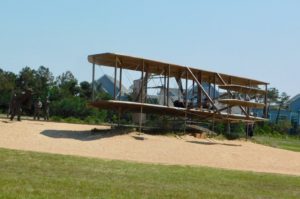 A replica of the Wright Flyer. 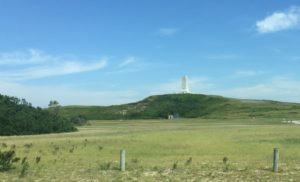 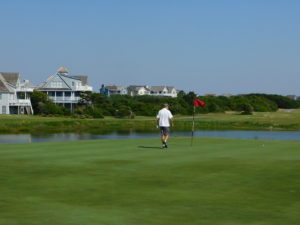 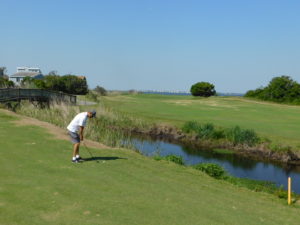 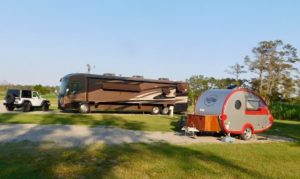 Our neighbor in the OBX Campground, Kill Devil Hills, NC.

Virginia Beach — The beach area here has nice hotels and several restaurants along the bike and walking path. The beach is beautiful and wide and long. But, just as in the Outer Banks, it was just too hot, even at the beach! Just can’t take the heat and humidity. Good news is that in two days the temp is dropping more than 20 degrees — yea, can’t wait.
Took a tour of the Norfolk Naval Base, the largest Naval Station in the world. It was very informative, although we did not get much time to view the ships in port from our tour bus. It has an interesting history, beginning in 1767. From there we went to the downtown waterfront area and the Nauticus National Maritime Center. There we were able to explore the USS Wisconsin, one of the largest battleships ever built. It was commissioned in 1943, and decommissioned in 1996. This ship not only played a major role in WWII, but also served in the Korean War, and led the Navy’s surface attack on Iraq during the 1991 Persian Gulf War.
Leaving Virginia tomorrow, heading north. 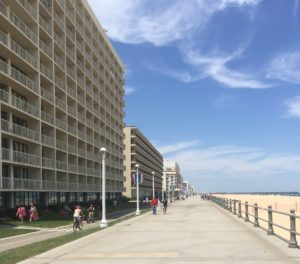 The boardwalk at Virginia Beach. It was beautiful, except it was 94 degrees! 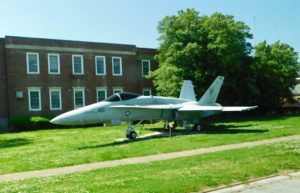 On the grounds of the Naval Ship Yard, Norfolk, VA. 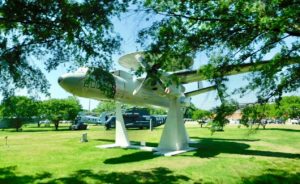 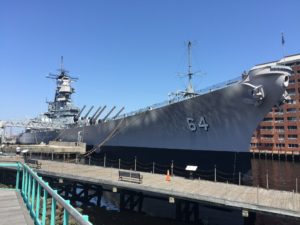 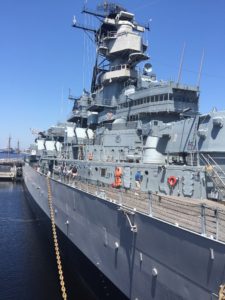 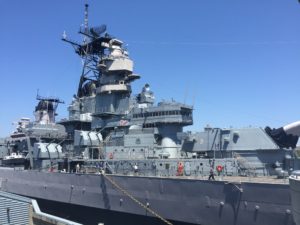